100 books for reading by students of KazNU

"100 books for reading by a student of KazNU” is a project proposed by Al-Farabi Kazakh National University in early 2012 for youth and society.

In 2012, by the initiative of the rector of our university Galimkair Mutanov, the project “100 books” was developed, a list of the best domestic and world classical works was chosen for studying by a student of the KazNU and a list was compiled. The main goal here is to increase the level of cultural and educational level of students by attracting young people to reading, searching and encouraging the best readers of the year.

The project is aimed at teaching students valuable works of Kazakh literature, the golden fund of world classics and spirituality of these works. This project contributes to the formation of a comprehensively developed, competent and competent specialist who is spiritual, patriotic, generous and ethnocultural, and who is rich in the spirit of national identity. During the first few years of the project, Al-Farabi organized a series of events, such as reader conferences, meetings with authors, and student surveys. As well as in our faculty of oriental studies among the Russian club of first-year students, there was also an event to read the 100 best books. Students diligently told interesting books that they read and conducted discussions about the books they liked and exchanged interesting books. 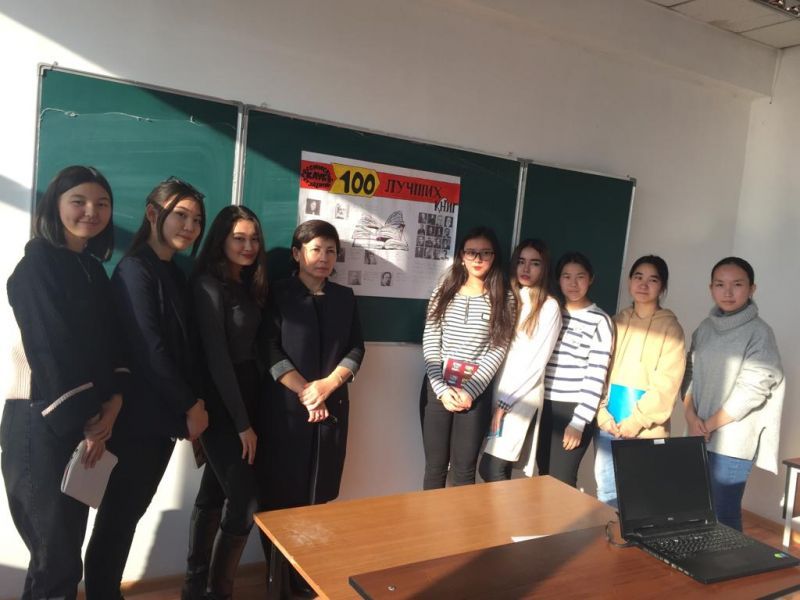 The project “100 books” for students of KazNU for four years will give impetus to the spiritual development of our people, including students. And of course, at such a moment I would like to thank the rector of KazNU Galimkair Mutanov and KazNU for starting and being the initiator of such a large project that gave such an opportunity to the development of the youth of our country.

Senior Lecturer of the Faculty of Russian Philology and world literature G.K.Tileubai